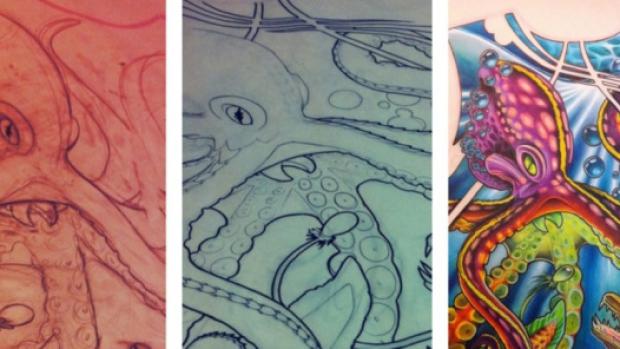 'From hipsters to gazillionaires - they all get inked'

Foto:
Naked-flesh season is slowly approaching. Once again, Amsterdamers will expose their bodies wearing half-buttoned shirts, tank tops and distressed shorts. Many of them will have their flesh not fully naked, but covered with tattoos.

Tattoos have been used for centuries to reflect changes in life. Passage into adulthood or induction into a gang were a transformation of one's status in the society marked by a tattoo. In recent years, you can see them on basketball players, models, musicians and celebrities. Tattoos have become a fashion accessory.

For Ran Yatush Mechelovitz, a many-tattooed and versatile Amsterdam artist it all started at a tattoo studio in Tel Aviv, Israel.

'When I was 18, I moved to Tel Aviv from a kibbutz in the north of Israel. At the beginning, I was fixing motorbikes, and did some construction works. After some time, I started doing piercings at a certain tattoo parlour, downtown Tel Aviv.'

The owner of the tattoo parlour did not want to teach him tattooing, and Mechelovitz decided to act independently. His choice of becoming a tattoo artist was not a random one. In Israel, he attended a prestigious Mitzpe Ramon High School for Arts.

Reputation
Arriving to Amsterdam from Israel, through India, with his Dutch love, defined him and his life goals. 'When I bought machine and started tattooing, my first drawings were simple designs. At some point, I began working in a small tattoo studio, and then the real thing started. I worked there for two, three years until I established my reputation.'

He showed me the sketches of his exceptional artwork. Mechelovitz's art speaks through tattoo images. His travels have been an immense inspiration. He is a great master of colour.Modest Mechelovitz told me that being a tattoo artist does not differ from being any kind of artist.

'Only the tools change, and every medium influences one another. A graffiti artist is just the same artist as the one who is using oil paint. The only difference is that the graffiti artist uses a can paint. The result can be the same. As soon as you get what you want, you are there. The art is about creativity, not about tools.'

Mechelovitz is fully engaged in his work and interactions with clients. He assists them with careful attention and meticulous approach to details. Everytime a new person comes in, he raises people’s consciousness about the quality of tattooing that they can get, the meaning and the possible consequences. After all, a tattoo is a wound. An eternal one.

'First of all, client is always right. If he or she comes and tells me that they want to have a big dragon tattooed on their back, I do it. However, I always distinguish between two groups of clients: those who are conspicuously tattooed already and freshmen. One look at the person tells me more than I need to know whether they will regret their decision.'

Recently, Mechelovitz has tattooed a client from Germany who requested his whole index finger to be tattooed in black. 'I looked at him: a spider web on his left cheek, and a capital X on his right one. In this case, I did not question his decision. He was already "outside the box".'

There is no place on a human body that Mechelovitz did not tattoo but he admits he would discourage a person to get his first tattoo in a visible spot, such as neck or a hand. It is against his code of ethics. 'A tattoo on a hand is a potential ad of an outlaw affiliation,' he told me. 'A hand is a first part of the body that you are going expose while greeting somebody. I always warn a client that it could hinder his or her future.'

In fact, Mechelovitz said 'there is resentment' among many people of the recent trend to get those body parts done before having experienced the cost and discomfort of inking the rest of the body.

'A tattoo, which symbolizes a happy event in your life might be repulsive for someone else, thus I always try to help my clientèle reach a common sense decision before they give their final word.'

It is possible, though, that the establishment is also easing up somewhat on its image requirements because tattoos have become a part of the popular culture.

'A couple of years back you could see tattoos only on gang members, prison inmates, sailors or rappers. Suddenly it is not just retro punks who look as if they have tossed over any intention of ever working a straight job. Hipsters, people with doctorates, or gazillionaires - they all get inked. Your body becomes your private art gallery. I think it is great.'