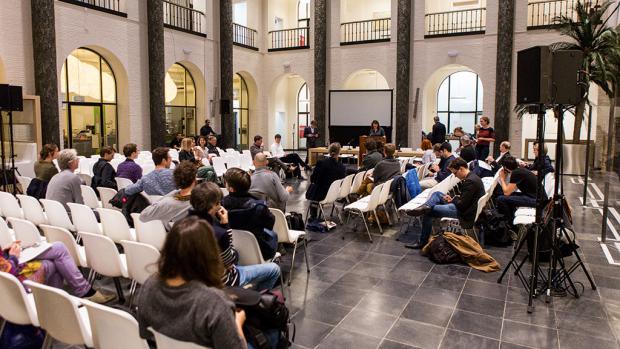 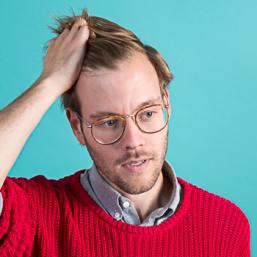 Discussion about university reform isn’t dead, as the Maagdenhuis debate series proves. But the battle has become confusing, the goals uncertain, the agendas mixed – and the dialogue (unfortunately), mostly in Dutch. 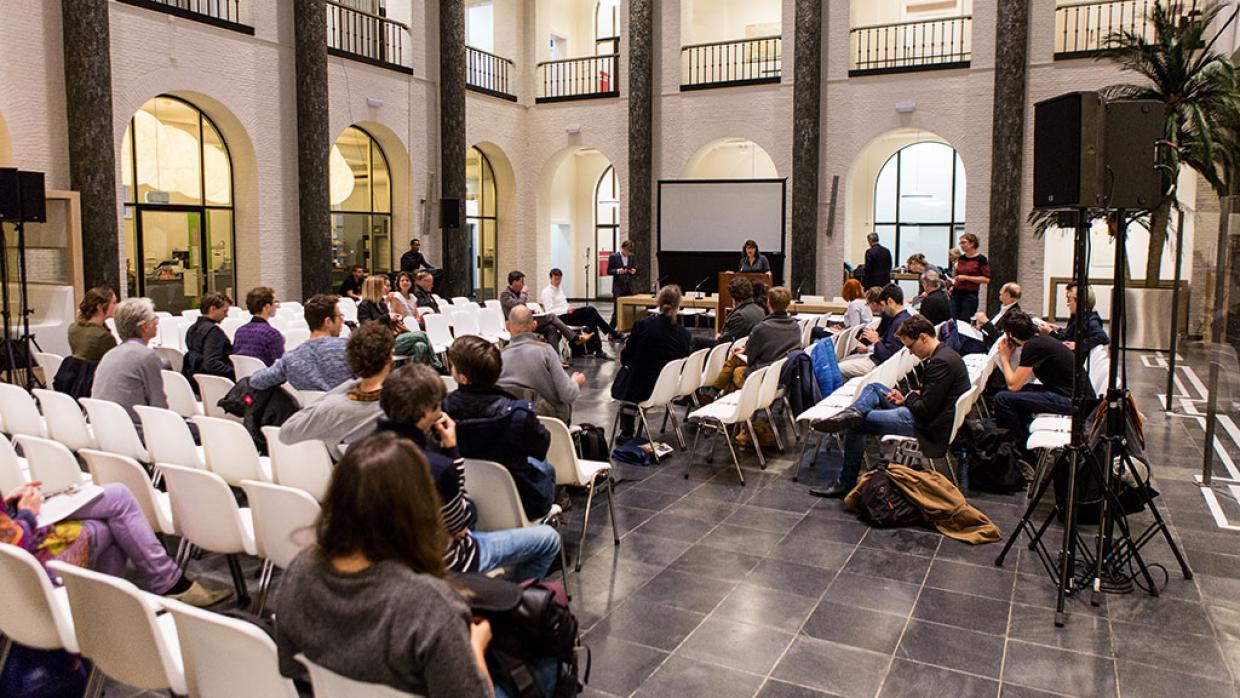 ‘I ’ve been lured here under false pretences,’ says PhD researcher Nima Madjzubi, eyes calm over his full, black beard. ‘There is no debate, just a panel that serves to impress an audience in the existing religious, even monarchical structure.’ The high, pillared hall is perfectly silent for a short moment as four panel members, two discussion moderators and an audience that doesn’t quite fill the hundred-odd plastic chairs, stare at each other. Suddenly the left side of the arranged chairs bursts into applause as the panel attempts to gather its thoughts.

All was not quite well at the Maagdenhuis, the administrative heart of the UvA and HvA. Nor should it be, for the evening entitled Kennis is Markt (a pun on knowledge is power, which translates loosely as ‘knowledge is marketing’) was the second in a series of Maagdenhuis debates, set up to air discontent in constructive debate in the wake of this year’s vehement protests against the university’s financing and politics. But it was hardly constructive.

Even to the students and staff that were present at the UvA and HvA before the summer that shook up the institutions, the series of events might seem confusing; the resulting constellations of action groups and ‘medezeggenschap’ baffling in their complexity. Although the pinnacle of the protests – the six-week occupation of that very same Maagdenhuis – was admirably international (with English as its main language), discussion and reporting on the university’s painful, post-occupation development, has reverted to Dutch. It is understandable that the internationals that had been following the democratisation process might feel somewhat ousted from the proceedings; new arrivals are virtually kept in the dark on issues that influence the UvA and HvA every day.

The impromptu first Maagdenhuisdebat in September rather missed its intended goal: to come to a consensus on what the ideal new university president should look like after Louise Gunning vacated the post. Groups such as The New University (DNU) and Rethink UvA/HvA, intent on keeping the spirit of the revolution alive and striking the iron of reform while still tepid, mostly wanted their grievances to be heard. After a summer of successfully challenging the rules of the game and questioning the status quo, former occupiers deftly shifted the focus from a good university president to whether the university even needed a board and why it still hadn’t conceded their original demands for a democratically elected College van Bestuur (University board). 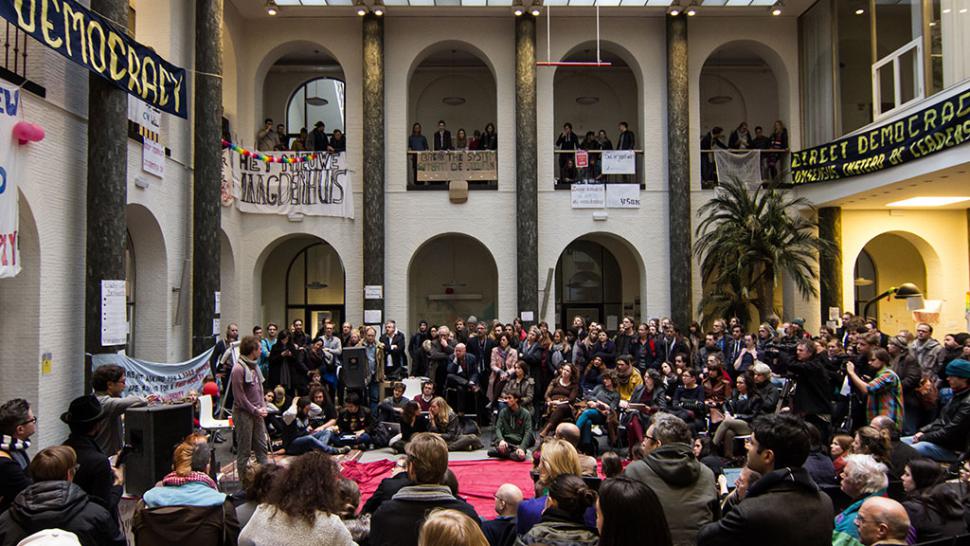 Foto: Daniël Rommens
One of the most crowded meetings of Rethink UvA during the Maagdenhuis occupation

The second time round, the debate organisers had come prepared with some star quality. Speaking on the subject of economic thinking, the market and the much-maligned rendement (efficiency) in University policy, was sociologist Willem Schinkel – hero of the political left and author of a recent essay on ‘cognitive capitalism’. Acting as moderators were quick-witted journalist Floor Rusman and Casper Thomas, writer for the equally left-wing magazine De Groene Amsterdammer whose chronicle of the Maagdenhuis Occupation came out last month. The subject of the debate this time remained somewhat vague, but revolved around the position of the university in the market in an age where knowledge and data are increasingly valorised.

Cognitive capitalism, Schinkel explained, captured the essence of the present situation better than ‘neoliberalism’ and other negatively charged terms. It encapsulates a system in which knowledge and creative thinking accumulate more value than classic labour. The anti-thinking of yore, he reminded his listeners, has been incorporated in this system: critics and disruptive thinkers are increasingly welcomed into boardrooms, ‘and even thanked for keeping the CEOs sharp.’ Schinkel also mentioned that 19th-century discipline of the body has been replaced by schooling of the mind, giving educational institutions an important new meaning as politicising mechanisms. The most urgent characteristic he named, though, was the crucial role of credit and debt in the current system: ‘There is no market with as many flexible employment contracts as academia,’ Schinkel said, adding that this ‘precarisation’ of work leads to competition rather than solidarity. Schinkel championed a university that is truly public, and proposed several ways to articulate new meanings of that overused term: free research, accessible education providing knowledge to a variety of publics and archiving knowledge for future generations. Music to university reformers’ ears; which is perhaps why most audience members were willing to overlook his admonition that it made sense to review, and sometimes get rid of, small and inefficient majors, and that protesting their demise (as DNU and ReThink UvA have done) was, in fact, a form of irrational conservatism.

But the audience had found a hero in the eloquent sociologist and philosopher, and woe to the next speaker. Barend van der Meulen of the Rathenau Institute, a think tank on organisation and development of science systems, was invited onto the panel to elaborate on his essay Each their university. He argued just that: instead of universities for everyone, it was time for the Netherlands’ thirteen, globally uniform universities to differentiate; to cater to the vast array of tasks and demands from society the institutes have to comply with. With questions such as ‘Is a university education an investment by the student, or an investment by society?’ he demonstrated that in mapping out the future, there’s rarely a right or wrong answer.

The debate’s organisers had no doubt planned the introductions to lead from the moderator’s well-chosen questions to a dialogue of high philosophical sophistication. After all, everyone present could find common ground, deploring the current academic reward-system and fashionable concepts of ‘excellence’. Yet the debate took several unexpected turns. A last speaker recast several of the concepts introduced in a more private-corporate idiom, speaking of ‘challenges’ and ‘creative industry’. During the moderator’s questions, a teacher sitting in the Rethink wing of the audience, which had been restlessly chitchatting for a while, rose to interrupt the proceedings. Making a time-out sign, she demanded that the audience be granted time for questions, too.

When the next round of debate had been hastily introduced, several former occupiers hungrily fired their questions at the panel: ‘Currently, neither research nor education is adequate at the UvA – how is differentiating towards one or the other going to make things better?’ ReThink-member Sicco de Knecht wanted to know. And how will societally driven ‘research challenges’ address problems like world poverty and the climate crisis? added Teun Dominicus, former Maagdenhuis occupier and a familiar face at debates like most others present.

The debate, steadily sinking into a quagmire of woolly metaphor (‘Universities could come in all flavours, we also have a vegetarian option!’) and misunderstood abstraction, suddenly symbolised the situation of university reform since last summer. The negotiations between occupiers and university board, while yielding plans (as well as a considerable budget) for this series of debates, ultimately stalled and resulted in a messy and violent eviction. ReThink and De Nieuwe Universiteit are active groups but they are torn between inspired yet radical ideologists and moderates. Some of the latter have voiced their fear of the groups becoming dogmatic and sectarian, others have abandoned ship.

'Honestly, I don’t understand what the fuck is happening' 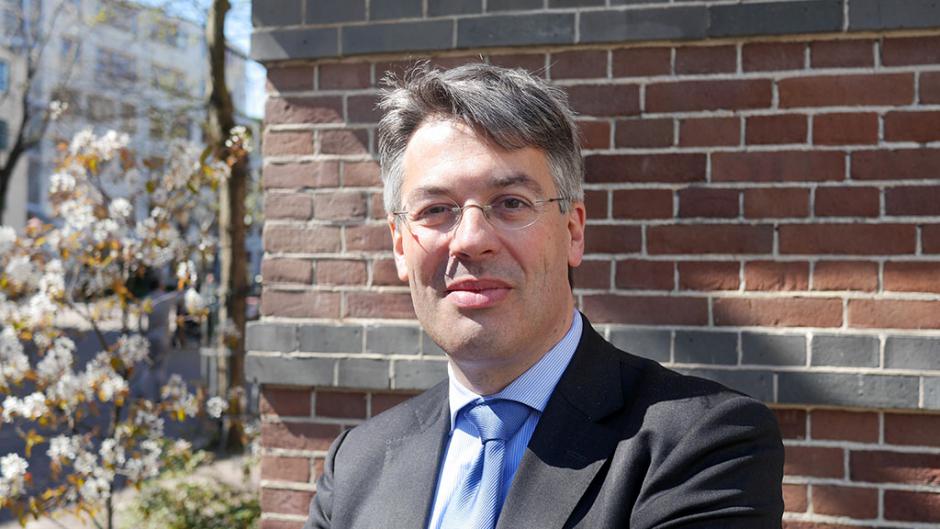 Another telling presence was a suited, friendly man in the back row. Edgar du Perron, vice-rector of the interim board, politely raised his hand near the end of the escalated debate, and requested everyone stop talking about Shanghai indexes and student excellence – ‘Let’s agree to stop using that word; what is ‘excellent’ to me is a school that can help a student go from an average grade of 6 to a 7.’ His words garnered a sigh of relief and some applause from all present, briefly uniting the room. Yet when du Perron sat down again, chaos had returned, thus illustrating the quintessence of his brief stint as vice-rector cum peacemaker. As he promised he would, du Perron mostly listens, and has admirably managed to make no enemies among the highly charged parties in the debate. However, the results of his admittedly formidable efforts have yet to be seen.

In summing up the night, Willem Schinkel concluded, ‘Very little is coming out, and that is making me increasingly uncomfortable.’ The sociologist seemed a little disenchanted, his faltering sentences contrasting to the eloquence of his commencement. Universities need a new story with which to defend their relevance instead of leaning on their supposed importance to glean public money, he said. There is a conservative reflex in the protest movement, he reiterated, but the question is why aren’t our universities publicly relevant? ‘It appears to me we are here with largely the same goals. Honestly, begrijp ik er eigenlijk geen fuck van’ – I don’t understand what the fuck is happening, Schinkel wrapped up; as the ReThink wing gave a last approving whoop. They probably didn’t know either, but it at least it sounded subversive.