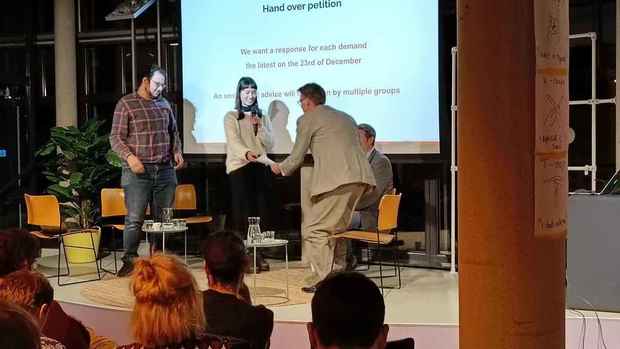 UvA Rebellion hands over anti Shell petition to UvA board 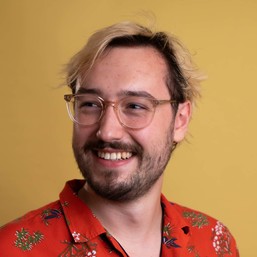 UvA Rebellion handed over a petition to member of the Executive Board Jan Lintsen. In the petition, the action group calls on the UvA to sever all ties with Shell. The petition was launched back in September and has been signed more than thirteen hundred times. 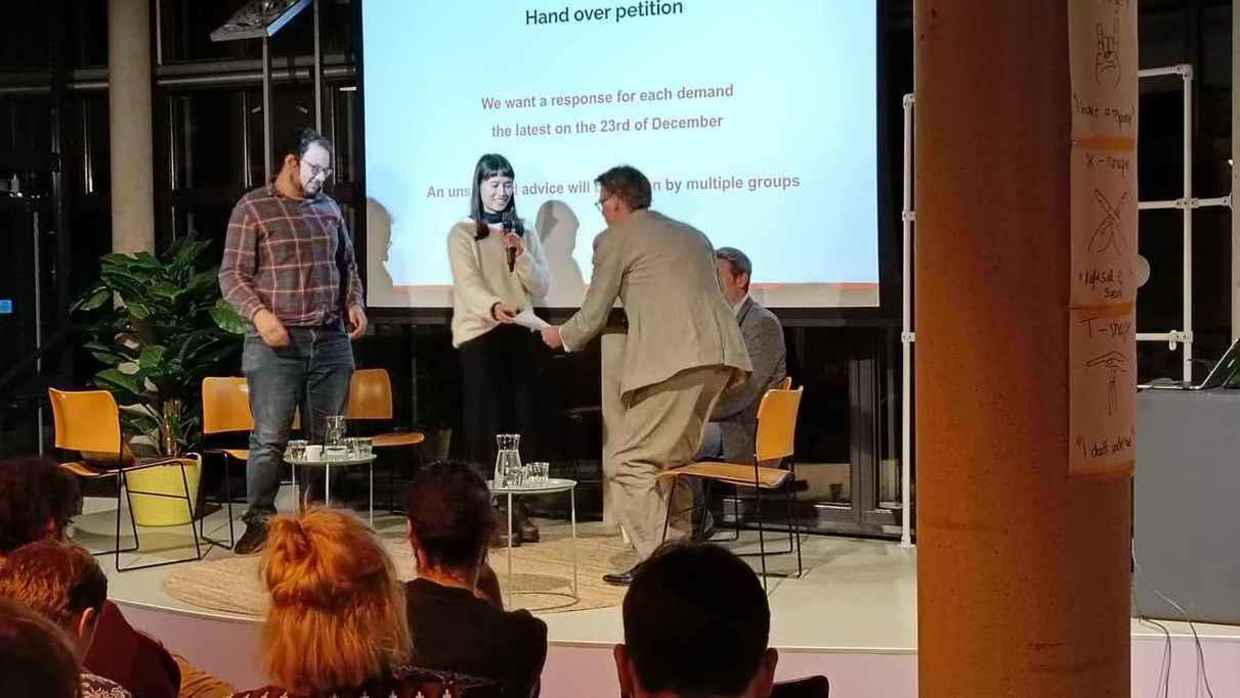 At the beginning of this academic year, UvA Rebellion, part of action group University Rebellion, started a petition demanding that the UvA sever all ties with Shell. The petition has now been signed more than thirteen hundred times, two-thirds of them by UvA students and employees.

Lintsen let it be known that the UvA does indeed receive money from Shell for three projects, but that this is primarily through funds from the Dutch Research Council

Last night, UvA Rebellion organized an event together with the Activist Party UvA in Vox-Pop, the creative space of the Faculty of Humanities. There, the initiators officially presented the petition to member of the Executive Board Jan Lintsen, who promised to come up with a response from the Executive Board before Christmas.

Funds
In an explanation after the handover, Lintsen let it be known that the UvA does indeed receive money from Shell for three projects, but that this is primarily through funds from the Dutch Research Council (NWO). “It is about research that has nothing to do with fossil fuels, but rather with sustainability, health and the energy transition.”

An activist from UvA Rebellion noted that this could be seen as contributing to greenwashing of Shell. This involves Shell pretending or appearing to be greener than it actually is, partly because of its collaboration with the UvA. “This is similar to a situation where the UvA would collaborate with the tobacco industry to fund asthma research,” was remarked from the audience.

Lintsen said he cannot comment on that now. He did suggest several times the idea of putting more effort into a committee to review collaborations with third parties. “A researcher can now voluntarily submit his or her research project to the committee. We are looking at making this mandatory.” The committee is not going to reject projects, said Lintsen. “The committee will deal with projects with potentially controversial partners, for example Shell. If the committee were to give a negative recommendation, it will go to the dean and then to the Executive Board, who will make a decision about it.”

Academic freedom
Lintsen emphasized that the UvA stands firmly for academic freedom. “We don’t want to make science more difficult than it already is. We also want to give researchers leeway in the choices they make. We will address this in our response.”

A question came from the audience as to whether the UvA can disclose its ties to the fossil industry in future budgets. Lintsen answered in the affirmative: “We have already discussed with the Central Student Council (CSR) all UvA's ties with Shell. I see no problem doing this for other companies as well. It wouldn't be in the budget then, but it would be in a letter to the CSR, for example.”

Another chemistry student reported that there is a lot of promotion and cooperation with Shell within the chemistry program. Lintsen: “I was not aware of that. I will start discussing this with the dean of the FNWI, because we don’t really want any corporate promotions or sponsorship of Shell in courses.”