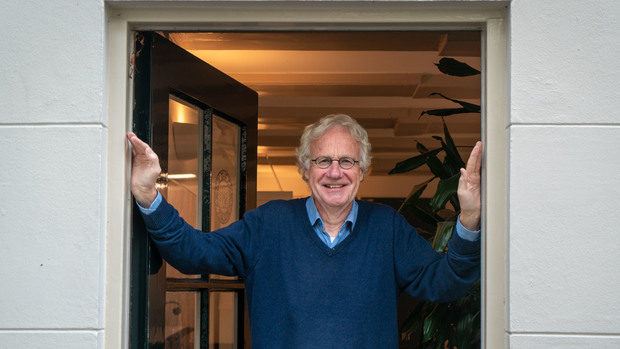 This week, student general practitioner Peter Vonk is working for the last time. Next Monday is his official farewell as director of Bureau Student Doctors: he is retiring. With melancholy, he looks back on the almost forty years at Bureau Student Doctors. “Letting go is another interesting exercise.” 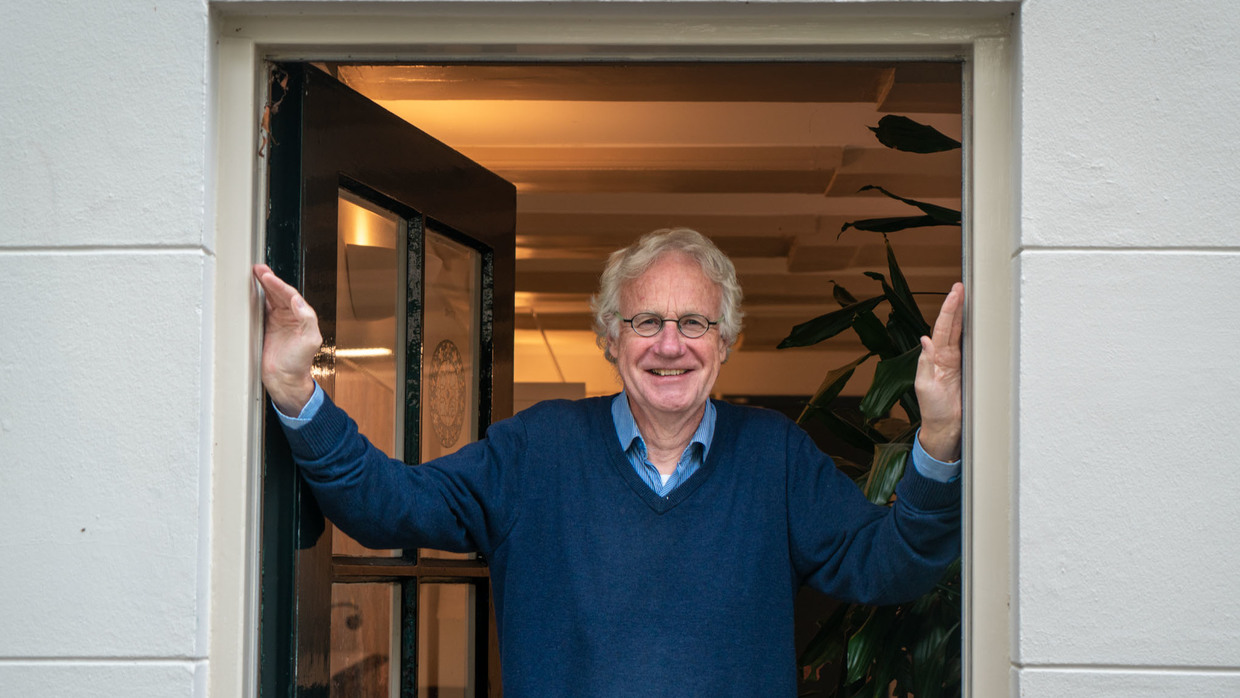 It is a busy Wednesday morning in the waiting room of the Student Doctors Office on the corner next to Allard Pierson. Despite the soothing music and plants in the waiting room, the wait is just long enough to build up the excitement of a doctor's appointment.

With a cheerful “Folia,” Vonk takes one of his latest patients into his consulting room, a cozy place with bookcases and a parlor lamp. “I’ve already cleaned up a lot. The bookcase used to be completely full.” 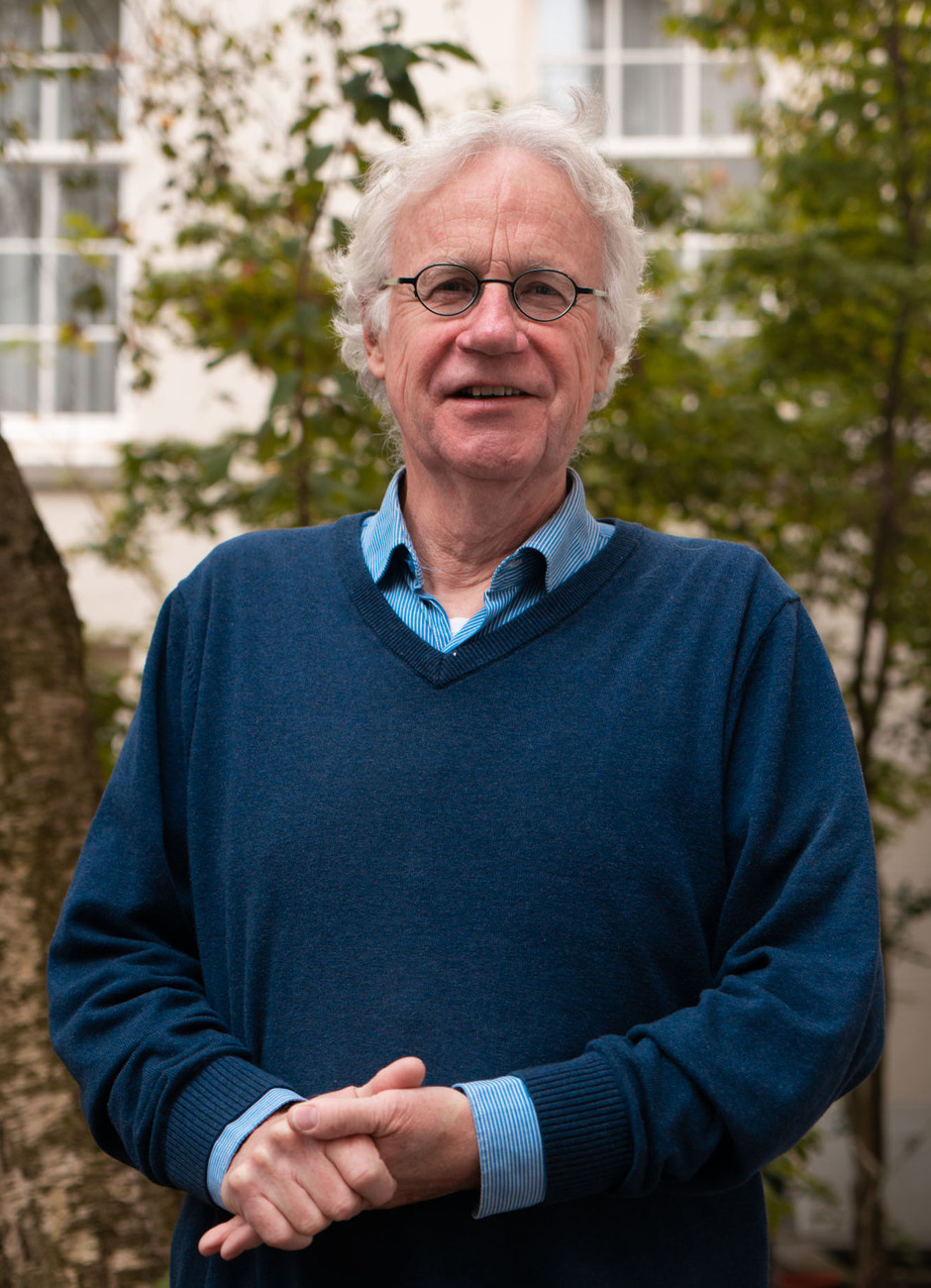 When Vonk applied to become a family physician in 1984, the vacancies were not there for the taking. Through a UvA advertisement in the Volkskrant, Vonk found his way among 100 applicants to the general student practice. “I was lucky. I ended up in a very pleasant group practice where we were dealing with a lot of young people.'

On his first day of work, Vonk drove from Sneek by car into the heart of Amsterdam. “I was a bit naive, because of course, you couldn't park here at all, even then.” Soon Vonk was visiting patients with a doctor's bag on his bicycle.

Colleagues describe Vonk as an enthusiastic family doctor. Whistling, he goes to work and is always busy making new plans. Last June, Vonk received an Honorary Medal from the UvA for, among other things, being a “driving force behind many initiatives to promote student welfare, including the Health Center on the Rooter Island campus.”

“As busy as we were with contraception and sexually transmitted diseases in the 1980s, we are now busy with psychological problems”

For nearly 38 years, you spoke to students in the consultation room. How did you see the UvA student change during that time?

“In the beginning, we were very much into contraception. Every day we had conversations with patients about the pill. Later we added hormone IUDs—copper IUDs had existed for some time—and implants that you can put in the arm. Nowadays, we are still mostly busy with IUDs.”

“In the early 1980s, HIV also emerged. Here in the practice, we had one of the first HIV patients in the Netherlands. He died, as did a number of other HIV patients. At that time, we sat here, depressed, in the practice. In the meantime, there are good drugs to combat HIV, but the disease is still there. We still get a new HIV patient every year. For four years, we have had HIV inhibitors that people can take preventively, called Pre-exposure Prophylaxis (PrEP). Men who have alternating contacts with other men can take PrEP to reduce the risk of infection.”

“As busy as we were with contraception and sexually transmitted infections in the 1980s, we are now busy with mental health issues. In the last decade, these have exploded quite a bit among students. Many more students are coming from abroad, and some of them struggle with psychological problems. They are lonely, depressed, or overworked. That also applies to some Dutch students, PhD students and alumni. We've had whole burnout waves. That's topic number one. We have also employed a number of psychologists for the past eight years. The conversations are sometimes all day in English. That is more difficult because the “consulting room,” the word says it all, is quite language oriented. If you have mental health problems and you speak a different language and come from another culture, it's challenging for both doctor and patient.”

Why is it that students are now more likely to have mental health problems?

“One of the causes is cell phones and especially social media. This makes students less able to concentrate. More often than necessary, the diagnosis of ADHD is then just around the corner. Students then ask for Ritalin, a drug for ADHD. We see a steep increase in that.”

Did students used to have depression less often, or was there simply less research on it?

“Depression has undoubtedly been there the whole time. I remember when I was a student; it was not always smooth sailing. But the need for mental health care is greater now, and more can be done about it with medication and cognitive behavioral therapy. The stigma of the psychologist is gone. There are several sides to that. It's good to work on yourself, but it doesn't always make life easier. Individualization also plays a role in this. The social engineering of life is still sometimes disappointing. Last week I was at a university in Romania where there was a very active student union. The students there are quite involved socially. In the Netherlands, it is very much every man for himself.

(Continue reading below the image.)

When the director of the Student Housing Doctors Office left suddenly in 1995, everyone considered you to be the most logical successor. How did that play out?

“One of the reasons I was hired in 1984 was because I had experience in my college's faculty board. They had the foresight to recruit someone who also wanted to organize things and not just be a GP. The Student Housing Doctors Office is not a store with a doctor and an assistant; it is a business. There are 10 doctors, two general practitioners in training, co-assistants, four psychologists, a few doctors' assistants, and a researcher. There's a big building, we have to deal with rules, the UvA and the health insurance company. It's all quite a lot of hassle. Then you need someone who likes to organize, direct, and manage. Well, nobody wanted to do that besides me. It's not that I'm running around playing the boss. That's not me. You can be the boss, sit in your chair and say: you have to do this and you have to do that, but with fellow GPs that doesn't work, of course. In no time, you'd run into trouble. Being the boss is more of a victim role. We all decide on the important things in our meetings. And the manual labor is for the boss.”

Among other things, you introduced eHealth, the Student Health Test and the Health Center on Roeterseiland that opened last September. What achievement are you most proud of?

“I think I'm most proud of our team. We work harder here than anyone else at the entire university. We are almost never closed, only on Epiphany or King's Day. Between Christmas and New Year's, the university sleeps, but we are awake. We don't just provide a little care on the side; we practice high-quality family medicine. We do all kinds of extra things like eHealth, we have a great website and are on the front lines when something new needs to be done. That's actually what I'm most proud of. We have also never had anyone quit, something that no faculty at the UvA can say. It's a long time, isn't it, 40 years to keep things together. No quarrels. I hope it stays that way. And that in 16 years we can look back on a century of student house medicine.”

What is the added value of a student house practice at the UvA?

“We provide a stable continuum of care at the UvA and are specialized in the problems of young people. A lot of general practitioners see mostly older people. Also, we are independent. We work here with 30 people. The UvA pays maybe one and a half FTEs, and the rest is paid by health insurance. It's been that way since 1981. That has also always kept the relationship with the UvA good.”

And what does the future of Student Housing Doctors Office look like?

“We're going to have a problem with healthcare. The population is aging and there are fewer and fewer healthcare providers. The minister has already said that more people should not work in healthcare; people are needed in other sectors as well. One of the options to provide more care with fewer people is eHealth. I think in five years, no one will be able to talk to the psychologist all the time but will instead receive care online. And that can work fine. Changing behavioral patterns can be done very well digitally.”

Are there other options besides digitalization?

“I don't know of any. I am curious to see what the world will look like 10 years from now. When I applied for a job in 1984, there were over 100 applications. Now when we put out an ad, no one comes. We can't get doctors. A lot of family doctors are being trained. The problem at first was that nobody wanted to work in East Groningen or Zeeland. But now it seems that even in Amsterdam nobody wants to work permanently. Many general practitioners want freedom and to work as freelancers. But one of the useful things about general medicine is that you are in the practice for longer periods of time. Only then can you provide continuity of care.”

How will it shape up in future?

“That's for my successor to figure out. We have to attract and teach doctors to make a long-term commitment to a practice. The government and GP associations also need to be stricter about that. You have a registration requirement as a general practitioner. One of the requirements is that you have to do enough continuing education and work enough. You could add as a requirement that you must work in a practice long enough continuously, because otherwise the continuity of care will be in trouble. And that could create more care. I do worry about that.”

“By the way, I don't have any plans, no world tour, I'll just take things as they come.”

“I have always resisted it psychologically because I still feel good and still like the work. But the collective bargaining agreement doesn't allow me to continue working. In the last six months, though, I've come to terms with it.'

Vonk is silent for a moment.

“We're all going to die, aren't we. So it's also good to start enjoying things you like to do, too. By the way, I don't have any plans, no world tour, I'll just take things as they come.”

“I also notice that this is a time to look back. I say goodbye with nostalgia. No one is indispensable, although it didn't always feel that way in recent years. But now I have to let go, so that is another interesting exercise. We have found, thank God, a good successor who likes the job and is committed. And I am fully confident in the people who work here and that things will continue to go well. When we celebrate our 100th anniversary, I hope I still get to come to the party.”

After his last day of work, Vonk leaves for his home in Workum, Friesland, but he will not just be sitting around. In his spare time, Vonk has always been active with the water boards; he even founded a national party, the General Water Board Party. He is resigning his duties in North Holland. Meanwhile, he has already started to recruit people for the elections of the Algemene Waterschapspartij in Wetterskip Fryslân. “I'm going to try to get on the board there. But that depends on the Frisians.”