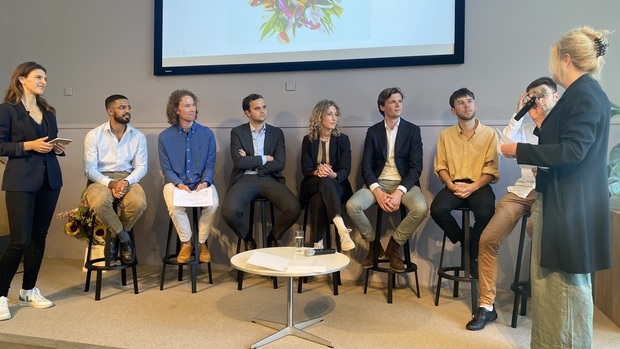 Two winners of UvA Thesis award for the first time

Tuesday afternoon, medical student Jelmer Savelkoel and artificial intelligence student Oliviero Nardi both won the UvA Thesis Award 2022. This was announced by jury chair Agneta Fischer in Spui25. The two winners do not have to share the main prize, but will each receive three thousand euros. Seven students were nominated. 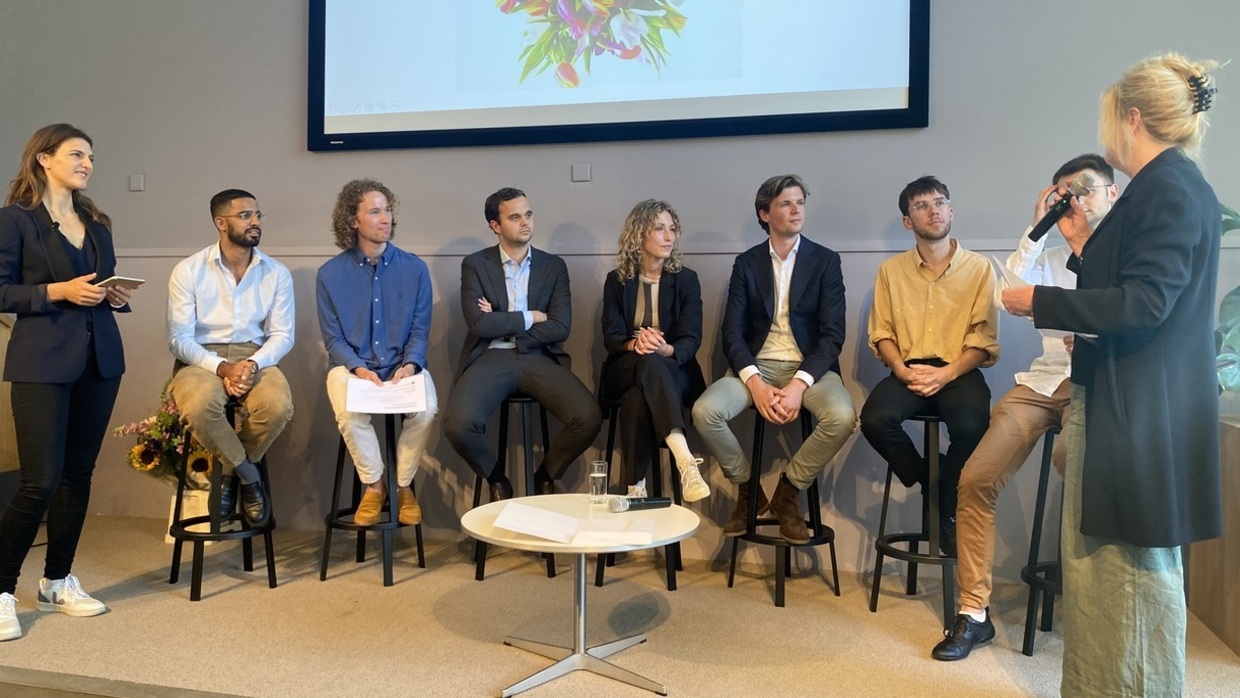 The seven nominees for the UvA Thesis award 2022. On the extreme left Anna Gimbrère, on the extreme right Agneta Fischer. Second on the left with a blue shirt winner Jelmer Savelkoel. At the right, behind Fischer the other winner Oliviero Nardi.
Foto: Folia

After two miserable Covid-years in which there was little to celebrate and to entertain, Tuesday June 28 was the big moment: the announcement and presentation of the annual UvA Thesis award could be celebrated live and on location, as it used to be, although some deans felt it could use a little more effort and decoration: the UvA board was conspicuous by its absence, the location was not packed with cheering alumni and the presentation took place in the small hall of Spui25. ‘Next year please return to the decorated Aula for the ceremony,’ said dean of the Law Faculty André Nollkaemper. Colleagues Hans van Goudoever (Medicine) and Agneta Fischer (Social and Behavioral Sciences) actually agreed with him. Having said that, it was party time this afternoon during the presentation of the UvA Thesis award 2022, which was won for the first time by two students, both now PhD candidates: Jelmer Savelkoel and Oliviero Nardi, the first recently a researcher in Amsterdam, the other in Vienna.

The award ceremony in Spui25 was moderated and presented by science journalist Anna Gimbrère, who explained that this year a total of 126 theses had been submitted by all seven faculties. Of these, there were seven winners in the end, one per faculty. Gimbrère had not read the seven theses from A to Z, but she had browsed through them thoroughly and had come to the conclusion that five of the seven theses had an ‘activist tone’.

Jury chair Agneta Fischer did not agree at all. ‘Nonsense. Activism has no place in science. It is about social engagement.’ According to Fischer, the jury had spent ‘hours deliberating’ about the seven theses to be judged. ‘It is a bit of comparing apples and pears and that made it difficult. We thought very hard and very deeply, but we couldn’t find a solution. That’s why we chose both Jelmer and Oliviero as the winners.’

Jelmer Savelkoel wrote a thesis about his fight for the recognition by the World Health Organisation (WHO) of the neglected tropical infectious disease melioidosis, which is caused by a soil bacterium, ‘but is not recognized by the WHO, so there is no global prevention programme, while the mortality rate is very high.’ According to him, wearing good footwear in areas where the disease is endemic can prevent it. ‘I will spend part of the three thousand euro on an awareness campaign,’ Savelkoel said. ‘I also see the award as recognition of the disease.’ He has already published about his research in the leading medical journal The Lancet and as a master’s student he won the Snapper Prize 2020 for his publications in the field of internal medicine and the formation of an international network in the field of infectious diseases.

The other winner was Italian artificial intelligence student Oliviero Nardi, who wrote a topical thesis in the field of artificial intelligence and researched the role of algorithms in justifying collective decisions. His thesis, A Graph-Based Algorithm for the Automated Justification of Collective Decisions, was rated 9.3 by the thesis supervisor.

There were of course five other nominees. Remarkably, there was only one woman among them. All five had already won the thesis prize of their faculty and therefore went home with one thousand euros each.