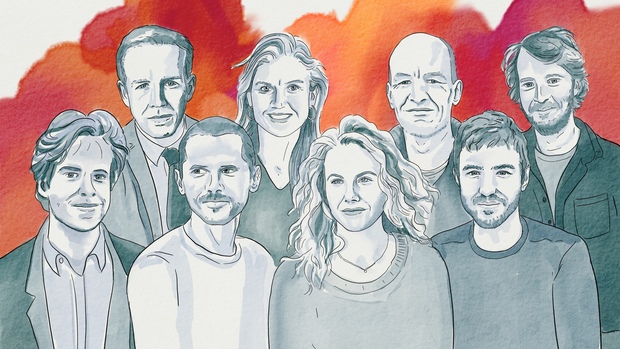 Nathan van Kleij, Bruno Bottega Pergher, Mathijs Boom, Peter Roessingh, Marloes van Wagtendonk, Tim Verlaan, Lucille Hegger & George Blaustein achieved what dozens of UvA employees have been working for for years: a clean pension. The General Pension Fund for Public Employees, the country's largest pension fund where every university employee is obliged to save money for his or her old age, stopped investing in the fossil industry.

Of course, this was not only thanks to these seven UvA employees, or to the thousand signatories of their petition. But: ‘our participants are concerned about climate change,’ said Corine Wortmann (chairwoman of the board of the Pension Fund). ‘And the effects that this has on our weather and on our lives. That also contributed to this step.’

Every year Folia proclaims a student or employee as UvA Person of the Year. In the past, among others WOinActie activist Rens Bod and StudieHub founder Erik van Halewijn were named UvA'er of the Year by Folia.

Some may see it as a manifestation of the Butterfly Effect: a butterfly's stroke in one place that can have major consequences in another. We see it more as an example of excellent timing. This group of eight showed an extremely good sense of timing, and should also be praised for the non-violent resistance they put up to reach their goal. Our UvA Persons of the Year are the eight employees behind UvA Fossil Free: Nathan van Kleij, Bruno Bottega Pergher, Mathijs Boom, Lucille Hegger, Peter Roessingh, Marloes van Wagtendonk, Tim Verlaan and George Blaustein.

They achieved what dozens of UvA employees have been fighting for: a clean pension. The General Pension Fund for Public Employees (in Dutch: ABP), the country’s largest pension fund where every university employee is obliged to save for his or her retirement, stopped investing in the fossil industry.

Our UvA Persons of the Year were not the first to try to put pressure on the universities to stop investing in the fossil industry. Already in May 2013, Students For Sustainability Amsterdam took the initiative to ask the Executive Board to ‘burst the carbon bubble’. Former vice-president Paul Doop immediately announced that he would ‘put it on the agenda’ of the National Association of Universities. Nothing changed.

Since then, students and staff have occasionally asked for attention for the way in which their pension deposits were growing. Master students Christina Marigliano and Tim van Dijk of UvA Fossil Free did so in 2017. ‘The UvA, with its public function, has a moral obligation to let the students it educates grow old in a healthy environment,’ they wrote. Nothing changed.

Last spring, eight UvA staff members put their heads together. They are people from all sorts of backgrounds, they work on different campuses, they come from different faculties and different departments. They are historians, library staff and biologists, but all with the same goal: a clean pension. The way they want to achieve this? A petition. ‘Our interest is to preserve a liveable world. That is why we want a fossil-free and a clean pension,’ says biologist Bruno Bottega Pergher on the day of the launch.

As if the devil were playing with it, the same day the National Association of Universities announced that it was setting up an ‘advisory committee’ to teach the detested ABP how to invest responsibly. Was this the very first appearance of the Butterfly Effect? Was this the sign of great timing? Two weeks later, UvA staff members were dragged out of the ABP-offices by the police. They had occupied the lobby-floor to force the fund to stop with fossil investments and refused to leave.

At the end of October 2021, the time had come: the petition was signed 1,100 times, not bad when you consider that the UvA has about 5,500 employees. It was time to present the petition, Nathan van Kleij wrote in an e-mail. As far as UvA Fossil Free is concerned, there is of course only one solution: ABP must stop investing in the fossil industry. ‘We want the UvA to take this position actively, to put pressure on ABP and not hide behind committees.’

Although the handover was to go ahead despite the Covid19-measures, it turned out not to be necessary anymore. On October 26, six days before the scheduled handover ABP announced with much fanfare that it would stop investing in the fossil industry. ‘Our participants are concerned about climate change,’ said board chair Corine Wortmann. ‘And the effects that this has on our weather and on our lives. That has also contributed to this step.’

The employees of UvA Fossil Free themselves remain modest about their contribution. ‘Although we are proud of the signatures, we have not changed the course of the oil tanker. That is down to ABP Fossil Free, who has worked tirelessly and with enormous dedication to bring this about, with the help of many local initiatives such as the “I want a clean pension” campaign by employees of the Municipality of Amsterdam, and action groups at other universities, including ours,’ says Nathan van Kleij. ‘It is a collective result, but with ABP Fossil Free by far the most important driving force.’

They want to say: they were not the only ones, not even at the UvA. Lecturers Disa Sauter and Loek Spitz wrote opinion pieces, student Rosa van der Laag was one of the people who took Shell to court, but UvA Fossil Free has constantly and successfully sought attention for the pension fund’s dirty investments.

The eight members of UvA Fossil Free, with their perseverance, their non-violent protest and their ability to mobilize people, have shown that you can make an oil tanker change course.