This week, at the official start of the academic year, The Young Academy (De Jonge Akademie, in Dutch) observes that many students and lecturers experience the academic year as ‘extremely long’. In the report A Smarter Academic Year (Een Slimmer Academisch Jaar, in Dutch), the young scientists argue for a shorter and more flexible academic year. 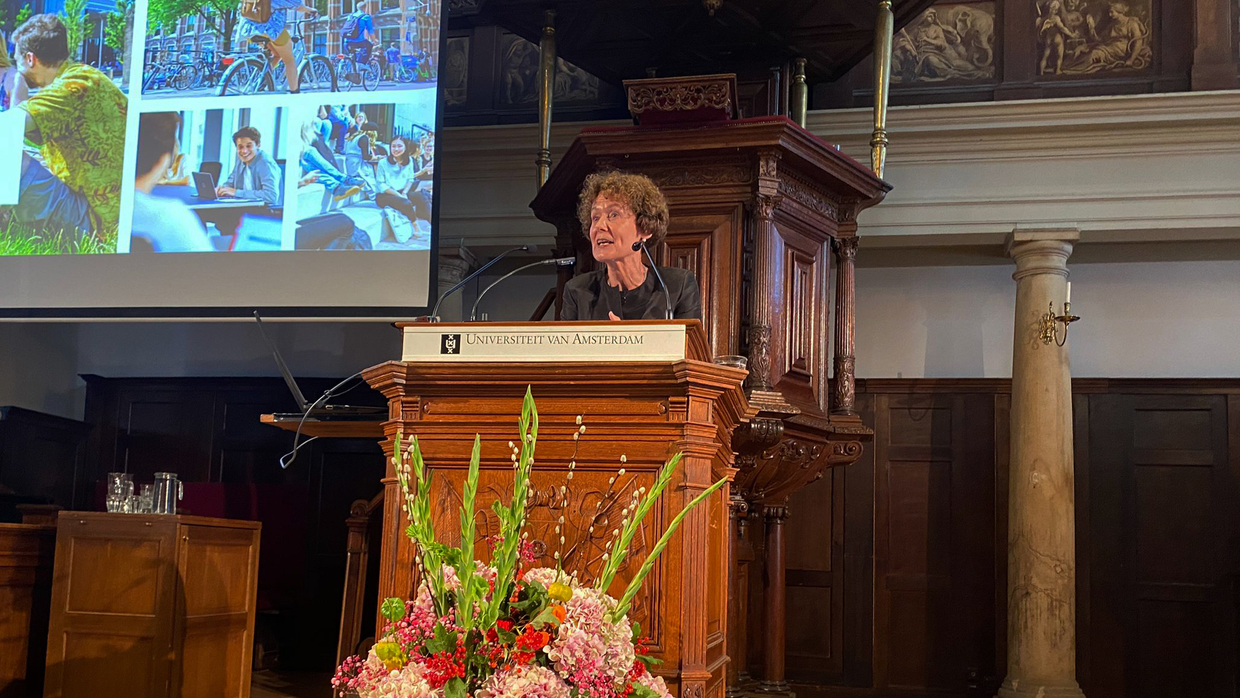 Geert ten Dam, President of the Executive Board of UvA, during the Opening of the Academic Year, last Monday September 6.
Foto: Foto: Dirk Wolthekker

It has been said and written many times: the work pressure in education and science is killing, burnouts are always lurking, students and staff are stressed or depressed and there is no more room for reflection and expansion in Dutch universities. The national university pressure-group WOinactie has been campaigning against this for years and last week, at the start of the academic year, The True Opening of the Academic Year (De Ware Opening, in Dutch) was also dedicated to these problems. And then – more or less simultaneously - the report A Smarter Academic Year was published, written by The Young Academy (DYA).

The UvA is in the middle with 30 teaching weeks per year, whereby it should be noted that the May holiday was only introduced a few years ago

The young scientists of DYA conducted a European comparative study into (work pressure) problems and solutions in Europe and compared these to the situation at Dutch universities. They also looked at the length and intensity of the academic year calendar, i.e. the number of weeks per year that teaching takes place, excluding examination work. The thirteen Dutch universities were compared with each other and with six ‘renowned’ European universities, including the University of St. Andrews in Scotland, the University of Ghent and the Sorbonne in Paris.

Looking at the Netherlands, students and staff at Erasmus University Rotterdam are the worst off with 35 teaching weeks per year, almost ten weeks more than at Leiden, where the academic year counts ‘only’ 26 weeks. The UvA is in the middle with 30 teaching weeks per year, whereby it should be noted that the May holiday was only introduced a few years ago at the UvA; before that, the number of teaching weeks was 31. In a Dutch perspective, this is quite respectable, but the annual calendar in Ghent, for example, contains only 24 teaching weeks and the Scottish annual calendar remains stuck at 21 weeks. If you would think that the remaining number of weeks is meant for holidays, no! They are not all holiday weeks, but also intended to do research.

One of the problems with the many teaching weeks at Dutch universities is the lack of research time. Or, as one of the teacher-researchers noted in the report said: ‘A shorter academic year would mean a lot. Nowadays, I have only five weeks out of 52 without teaching obligations. That is far too little to do research.’ A common complaint among Dutch scientists is that they have to teach so much that they have to do research in their private free time. In addition, the Dutch academic calendar has relatively many examination weeks.

The report’s authors of TYA advocate ‘more air’ in the academic year: periods set aside for self-study and reflection for students, while lecturers can then focus on other core tasks. According to the authors, there should be ‘real breaks’ in the educational year. In concrete terms, they suggest adapting the educational calendar flexibly to the needs of the various disciplines, reducing the number of teaching weeks and test weeks while monitoring teaching periods ‘strictly’. If this were to happen, then – analogous to for example Belgium or France – students would now still enjoy their holidays and scientists would have time to do research: in Ghent, the second week of May is the last teaching week and teaching only starts again in the fourth week of September. At the Sorbonne, teaching stops in May as well and the return to campus is not on the calendar until the third week of September, when students are back in their lecture halls.