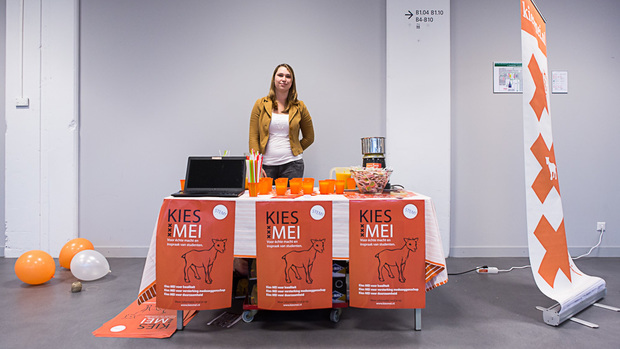 'Being a student council member is not really a coveted position'

After the Maagdenhuis occupation in 2015, things were supposed to get better with student participation, but what came of it? This week there are student council elections again. 'It's also easier not to be involved in the uni, especially if it's not absolutely necessary to successfully complete your degree.' 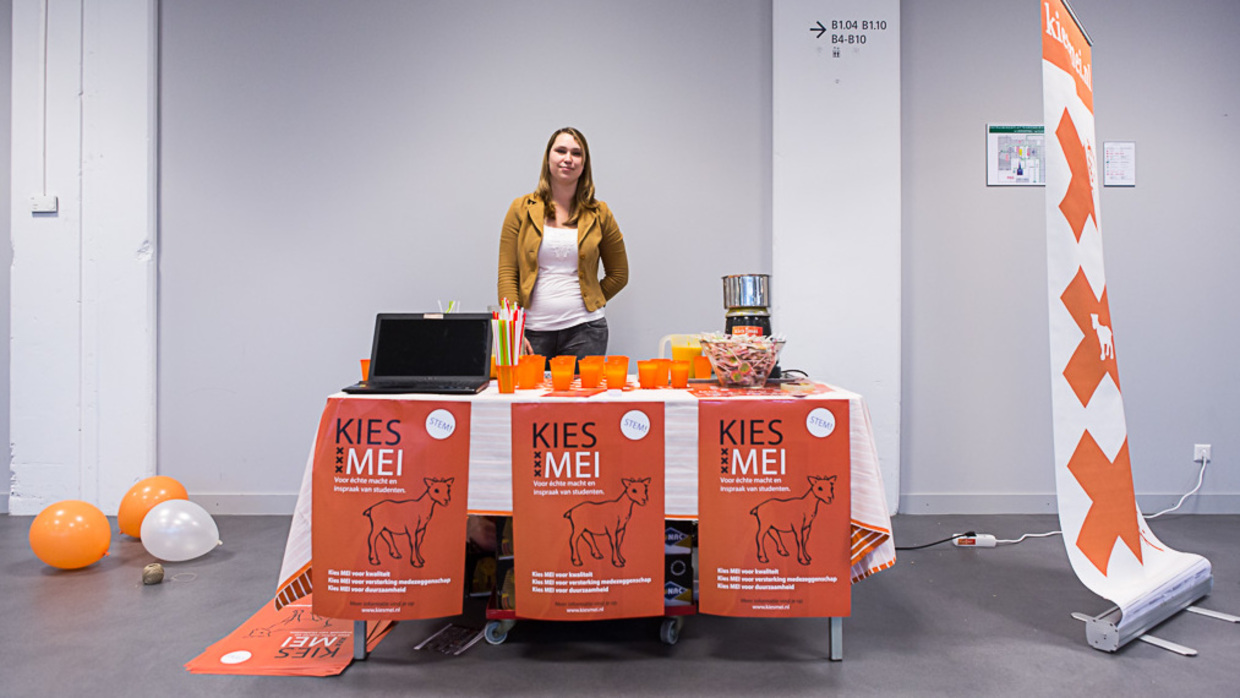 'I think there is a connection between the turnout for the student council elections and the number of people who want to be on the electoral list anyway. There are often too few of them. And because there is little interest, there is also no competition to be on a list. This means that being a member of the student council is not really a coveted position. You can also see this in various faculty student councils, where there are not enough council members. Out of necessity, council assistants are used, but they have no democratic mandate because they are appointed and not elected.'

This is what law student Nina Hol says, chairperson of the central student council on behalf of the liberal student party De Vrije Student (DVS) in the academic year 2020/21. This week, she is closely following the student council elections, which already started with a major defeat for DVS competitor UvASociaal which submitted its electoral lists too late. The party thus excluded itself from the elections and may follow student politics from the sidelines next year, hoping nobody will have forgotten about UvASociaal by the next elections.

'Parties have a week to submit their lists, so you shouldn't wait until the last moment,' says Hol. On the other hand, she also understands why such things go wrong. Both in student councils and in study associations it is always the same kind of people who are active, and for the councils most parties have appointed one person who is responsible for submitting the electoral lists. If this person is absent at the last minute, you are just too late. 'This may be an internal party problem, but there are simply too few people who have the time and inclination to do something in the field of co-determination. And don't forget: board grants go to students who actually serve on the board of one of the student councils. This does not apply to the party leadership; these are honorary jobs for which there is no money, but which still take up a lot of time.'

Incidentally, it seems that international students are more interested in a place on one of the lists than Dutch students. Parties like Inter, 020 and New Democrats have almost exclusively international students on their lists, and traditional parties also have many such students on their lists. This is often an attractive way for them to get involved in the UvA, but also to bind fellow international students to the university. However, partly due to corona, there has been a hitch: many international students returned home and pursued online education. Sometimes they still do, which means that the elections are not on their minds, like in the case of Elisa Terragno Bogliaccini, Master's student in International Development Studies. 'I live in Mexico and have never voted in student council elections. I'm not aware of them, either, and I don't know how the system works. I am not planning on voting either. I'm writing my thesis here and am not involved in the university.' She has no idea that the elections are taking place this week and won't come across any campaigning UvA students in Mexico who could persuade her to vote.

Until 23:59 on Friday, students can cast two votes: one for the seven direct seats in the central student council and one for the faculty council of the faculty where they study. The entire week, parties are campaigning to get as many people as possible to the ballot box (read: the electronic voting booth). It has not been very successful in recent years and not only because of corona. Even before that, the total turnout never amounted to much more than around 20 percent, with the turnout for the direct seats in the central student council usually being much less: 11.2% (2021), 11.9% (2020), 11.2% (2018), 16.0% (2016).

Where the percentages will end up this year is not yet known, but sociology student Aisling Kenny will not get involved, either. 'To be honest, I'm not planning to vote. It's probably important and I should know more about it, but I just don't have any major issues or strong opinions that would make me vote. I'm satisfied with how things are organised here.

Besides, I followed the first year entirely online, so maybe I got less involved. It takes a lot of energy to get and stay involved. It's also just easier not to be engaged with the uni, especially if it's not really necessary to successfully complete your degree.'

Then of course there is always the content of student council work. It can be a lot of fun and interesting for your CV: meeting with UvA board members about important issues such as budgets, millions of euros in investments, institutional plans, deciding on curricula and appointments of professors, deans and other high-ranking people. But how much of a say do you really have? And isn't it a waste of time? Student party 'Trots op FGw' (TOF) had enough of it in recent months and disbanded itself. In a statement, the party wrote that co-determination at the UvA is an excuse 'to give decisions imposed from above a semblance of democratic legitimacy'. Whether this is completely true remains to be seen: when the former dean of the FGw, Fred Weerman, wanted to be reappointed last year, students were so opposed to his reappointment that he was kicked out. Still, a small success for student politics!

His successor, Marieke de Goede, was subsequently appointed, but according to students that was predetermined. They may have had the right to advise, but what use was that? They had only had '45 minutes' to have a 'supporting discussion' with her, wrote students Jelle Mars and Sara Kemper. TOF was not the first and will probably not be the last FGw party to dissolve itself because it ran aground "in the system": De Decentralen, Humanities Rally and the Anti-Coronapartij preceded them. More moderate TOF members, by the way, came up with a new party last month called Lijst TOF. The constant change of parties - and thus the lack of party-political continuity - will probably also play a role in the issue of the rise and size of student parties. That is probably why UvASociaal has always been the biggest party, because it has existed for years, but has now been left out for a year.

It does not seem easy to involve students in student politics, either in or outside corona times. Perhaps it is because of the organisational structure of the UvA's employee participation body, in which students and staff operate separately in distinct employee participation councils, staff in the works councils and students in the student councils. Wouldn't it be better to have a single University Council in which both councils act together? Unity is strength, right? 'No, that really doesn't seem like a good plan,' says Nina Hol.

'Student councils and works councils already work together regularly in a so-called joint meeting in which they formulate joint standpoints and take decisions. You notice in such a meeting that it is easy to lose focus. Issues that are important to students are snowed under by works council issues and vice versa. Plus, the lopsided balance of power between students, who have a one-year mandate and have to learn a lot, and staff members who have a three-year mandate in the works council and have a lot more experience, is also visible. Employees just keep getting their salaries paid, while students have to make do with an allowance.' As far as she is concerned, there should be higher fees for council work, council members should be given more responsibilities, the councils should be more visible and should communicate more to the outside world about who they are and what they do. 'It should feel like a real and important job. Then the competition will start, it will be honourable to be on a list and the turnout will also go up. But anyway, I'm glad I'm not the list leader now, because it's not easy.'

With thanks to Sasha Lambert.

You can vote until Friday evening 23.59 hours via this link.