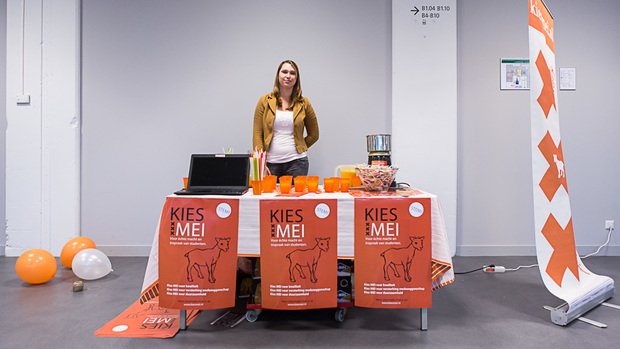 The UvA central electoral committee has decided that UvASociaal will not be allowed to participate in the May 16 student council elections. A tragic incident related to the war in Ukraine and miscommunication led to the late and incorrect submission of the electoral lists. UvASociaal is appealing the decision.

UvASociaal - like the other participating parties - should have handed in the electoral lists according to Article 20, paragraphs 1 and 2 of the Electoral Regulations of the Central and Faculty Student Councils. This stipulates that the lists must be handed in to the central electoral committee by the final submission date, in this case April 19, by no later than 5 p.m. and in person (physically). But Sofiya Koba, the Ukrainian president of UvASociaal, received tragic news from the war zone in Ukraine a few hours before she was to hand in the lists: one of her closest friends had been killed. Understandably, she became so upset that her mind was not on the elections.

The central electoral committee of the UvA acknowledges that the war in Ukraine “is exceptional”, but the committee adds “that this does not apply to the situation indirectly caused by this”

4:32 p.m.
The reports of the central electoral committee show that Koba informed the central electoral committee of the incident by telephone at 4:32 p.m., i.e., half an hour before the deadline. Shortly thereafter, Koba sent a text message saying that another board member of UvASociaal would deliver the lists at 5:30 p.m. This was then not done in person, but electronically by e-mail and not at 5:30 p.m., but later. The last list was in at 6:40 p.m. So not only were they delivered late, but also in the wrong way.

The next morning, April 20 at 11:12 a.m., the office sent a message to Chairman Koba summing up what had gone wrong and that the office would like an explanation. The office secretary then received the lists from Alicja Staszak, one of the other board members of UvASociaal, at 12:35 p.m. at the reception desk of the Maagdenhuis. During the meeting of the central electoral committee on April 25, it turned out that there had also been miscommunication within the board of UvASociaal about the delivery of the lists.

A deliberate risk
The UvA central electoral committee acknowledges that the war in Ukraine “is exceptional” but adds that this “is not the case for the situation that indirectly arose because of this, in which it proved impossible for UvASociaal to submit the lists of candidates on time”. The bureau not only refers to the formal rules, but also to the fact that parties had a full week to hand in the lists, namely beginning Monday, April 11. Parties that leave it to the last day and even the last hour, including UvASociaal in this case, are deliberately taking a risk, a risk that is entirely theirs. If some disaster subsequently (still) occurs, the party can be expected to make an utmost effort to hand in the list(s) on time.” That did not happen. All in all, it is sufficient reason for the bureau to exclude UvASociaal from participating in the elections.

Appeal
As a result of the exclusion, one of the most important players in this year's student council elections is not participating. UvASociaal had submitted a list for the CSR and additionally with Economics & Business Administration, Social Sciences, Psychology and PPLE. With the exclusion of UvASociaal, the playing field is suddenly completely open to other participants. UvASociaal can still appeal the decision of the central electoral committee. Chairman Koba could not be reached for comment, but fellow board member Staszak was available. She says that UvASociaal will issue a statement later in the day, but also that the party will “appeal the decision of the central electoral committee”. The party has until May 4 to do so.

Previously, late submission of the lists also led to problems: in 2015, List Sefa and party Mei submitted their lists too late, after which they were excluded from participation. Appealing the decision was unsuccessful. This exclusion led to the end of party Mei.