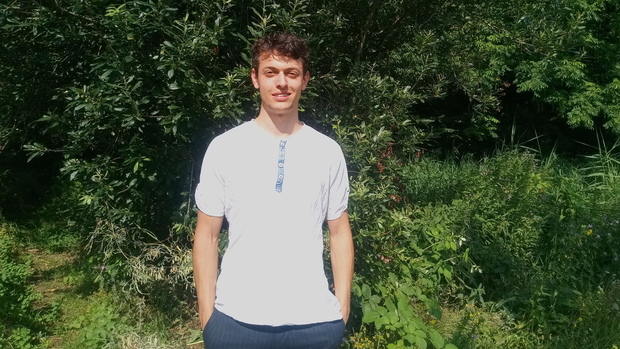 Pjotr van der Jagt (21), a Biomedical Sciences student at the Faculty of Science, has been elected as chair of the Central Student Council (CSR). Van der Jagt is a member of the Lief student party and was previously a member of the biomedical science study committee, which deals with educational issues.

‘Studying is about learning with each other, about each other and from each other’, ran his successful campaign slogan during the faculty student council elections. He was number two on the list of student party Lief which after winning ten out of twelve seats, went on to become the largest party at the faculty. First he was elected, then delegated to the CSR and then elected as CSR chair in a secret vote.

On the Lief website, van der Jagt emphasises the importance of interdisciplinarity. ‘As a student, the focus is often on only one discipline’, he writes, but it’s important to ‘discover how far your interests and abilities go’. ‘I think exposure to different disciplines means we can learn a lot from one another, but also learn more about ourselves and perhaps gain new interests. Because who knows for sure who they want to be when they grow up?’

‘I think exposure to different disciplines means we can learn a lot from one another, but also learn more about ourselves and gain new interests’

‘As CSR chairman, I want to focus on quality of education’, he states. ‘It will be a busy year, because we’ve already got our hands full of finance issues. This will be the first thing we deal with. Like the Central Works Council, the departing CSR has not yet approved the UvA’s financial plans for next year.’

He lists sustainability as another important topic. ‘I think that we are working hard on sustainability issues at Science Park and this is something I want to continue. It’s not a trend for nothing! I want to stimulate innovative ideas and spread the knowledge we have about it.’

The CSR has fourteen members. Seven of them are directly elected, while the remaining seven are delegated by each of the seven faculties, one per faculty student council. But for one (Maaike Rubenkamp of student party UvASociaal), all seven directly elected members have already taken their place. As a result, Maya Moreno, who is also part of UvASociaal but who was not initially selected for the CSR, is now a sitting member. The Faculty Student Council of Dentistry has not delegated one of their members to the CSR and is thus not represented in the council.

According to the election results, the fourteenth seat — not yet filled — is for a member of student party Inter, although it is not yet known who will take it on.

Other new members of the CSR include Alicja Kepka (vice-president, UvASociaal), Hahe Son (commucation & PR, UvASociaal), Maya Moreno (organisation & finance, UvASociaal) and Ömür Kirli (education & research, Tof party, delegated from the  humanities faculty). This is the second year a delegate to the CSR was elected chairman. In the past it was common for the leader of the largest party in the CSR to become chair.